Eric Boo is a Spanish comedian, a modern clown whose comedy is based on the language of mime. In his shows, Eric Boo seeks to transform reality through play and imagination, involving the audience in that transformed reality, so that when entering it, attendees release their fantasy and laughter. One of his objectives is to get viewers to forget themselves and enter a playful universe, where the innocence of the child within them can emerge without hindrance. 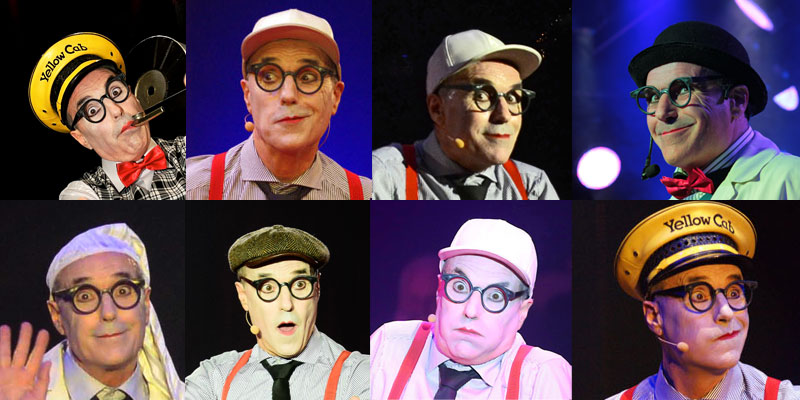 Eric Boo is a clown of the new generation. This means that it does not come from the world of the circus, the traditional school of clowns, nor from any clown training school, but comes from another school. His basic training has been mime and the street. Eric Boo is part of a new generation of clowns that appeared on the professional scene in the mid-80s and was characterized by using the language of mime and having been working for years on the street, which gave them great freshness and spontaneity. As is the case with David Shiner, Peter Shub, and Cesar opening the way for many others who have continued to appear on the professional scene since then.
In 1983, at the end of his studies in Fine Arts (painting), Eric Boo came into contact with the world of mime at the hands of mime Christian Athanasius. This meant a revelation for him, the discovery of an art of expression that came naturally to him and for which he seemed to have great ease. Then she attended another mime course with Joan Fanecas in Barcelona and followed several courses in body expression and dance. At the end of his painting studies, Eric Boo began working on the street using the language of mime as a tool of expression and making his profession of it. In a short time, he developed a great variety of numbers and his character became solid and original. For 5 years he was performing on the streets of many European cities, thus developing a great facility for improvisation, communication, and playing with the public. In this period he learned enormously from other comedians, such as Johnny Melville, whom he saw acting in Barcelona and that deeply affected him, or those of many other comedians who were acting on the street. In the summers of 1984 and 1985, he shared the street in Zurich with Peter Shub, thus beginning a friendship also peppered with conflicts due to the closeness of his characters and some of his “gags”. In 1987 he participated in the “X Mondial du Cirque de Demain Festival”, which marked the beginning of his professional career. Three years later he found himself working at the Moulin Rouge in Paris, where over the years he has reached 11 years of performance in this legendary Parisian music-hall.
From there Eric Boo has worked in numerous circus shows, such as cabarets or music-halls, cruises, etc., bringing his comedy and his interaction with the public to great international recognition. In 1994 he received a silver track in his participation in the “II Genova International Circus Festival” in Italy. But his greatest recognition has been received by acting daily in numerous shows and making the audience laugh with his comedy.