Berlin, January 2, 2015 “The audience is too much fun, a herd of mere waterheads,” reasoned the artist Paula Busch a hundred years ago. And also: “You’re so good at it. But if you don’t want to, you can get in shape and let Archangel Gabriel dance in a bathing suit.” But there are also times when they become audience members who become agile and flexible creatures. They are then unreservedly entrusted to great artists like the wonderful Eric Boo.

The clown is leaving. It has become silent in the Tempodrom when the clown takes two little artists from the Far East by the hands and jogs with them towards the exit. The children in the audience hold their breath, the adults swallow a little (and some are probably embarrassed because they are moved): it is a brief and intimate moment in the Roncalli Circus, in which time is as still as on the clock, that one of the little artists carries with him.

Then confetti snows, the intimate lights go out and the great merciless spotlights come on. No more illusion! You dress waterproof and go out to the square. The snow has melted, the remains of firecrackers on the sidewalk look like dirt. The city is entering the New Year.

The people in front of the Tempodrom don’t let it bother. You are still completely ecstatic. They happily set off.

One that turns a little into a lot. He is playing imaginary tennis with a visitor and the spectators are bowing down to laugh. Take the unknown young woman in the back seat, she never gets too close but suggests that she has great curves, and this is how you get your frivolous thoughts.

Boo mumbles and makes a lot of strange noises, moves like a doll on strings, and trips over the air holes. Boo laughs from ear to ear whenever he feels like it. And his face loses all grip if it doesn’t mean life well to him.

Boo is a modern clown who suits Roncalli’s boss, Bernhard Paul. He says that the political correctness and the fanatics of the riots destroy the sentiment of the circus: “It is like a conspiracy against the circus. First PETA with its off-road hit that also hurts the innocent and now some super smart people in France who think they have to run after people in clown suits with chainsaws. Idiots. What do the circus and clowns have to put up with! “

Paul breathes like a walrus. Then he returns to himself: “But with us, the audience reconciles after a few minutes.”

Bourgeois Henry Boo. Born in Barcelona in 1955, he also studied art there. He first appeared as a clown when he was 27 years old. Tingling all over Europe. He received a special award at the “Cirque de Demain” festival. Gave the wise fool at the “Moulin Rouge” for seven years. Boo is always working on new numbers, he sees people standing and on their faces, he paints magnificent colorful pictures.

Boo is the embodiment of creativity and he’s an incorrigibly good guy. 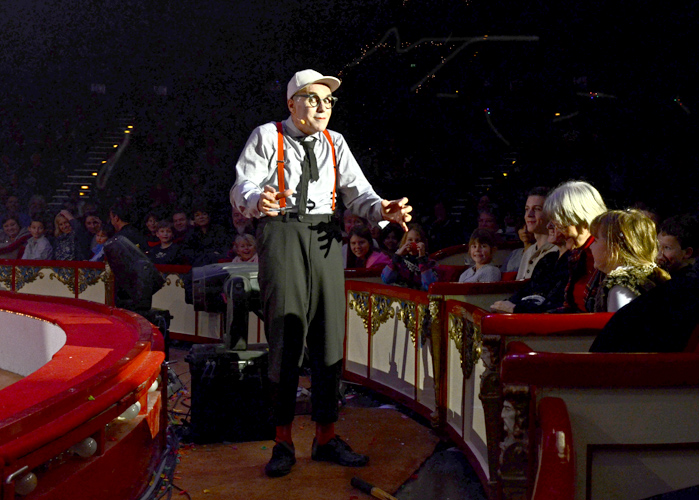 Do you fancy a dance? The clown catches people. And the audience? – He’s out of breath.

Sometimes Boo looks like Buster Keaton. So too these days. There is a mischievous man, ageless and muttering. A wise joker and a verbal magician.

And when he is standing there with his little companions in the confetti snow, then he is tired and happy.

Tired because being happy is an effort.

And happy because the effort was worth it again. Not even Gabriel danced in a swimsuit